Open source software has become an integral part of product development for organizations of all shapes and sizes. While engineering teams once relied primarily on proprietary code, open source now comprises more than 90% of the components of modern applications.
‍
As open source software has grown in popularity, managing compliance with legal and intellectual property

There are hundreds of different open source licenses, most of which can be grouped into two categories:

These place little restriction on how others can use your source code and re-share your software. They also generally have a high level of license compatibility, meaning you can legally combine multiple pieces of software and distribute them together.

These require that anyone who releases a modified open source program must also release the source code for that program. This type of license generally allows users to change and re-share your creation as long as they also include their source code for others, too.

How to Choose a License

How to Apply a License

More than 60% of open source projects use one of the following three licenses: MIT (permissive), GPL (copyleft), or Apache 2.0 (permissive). Here are they key elements of each:
Read More: Common Open Source Licenses

If you are interested in profiting from the software you’ve developed, an open source license that lends itself to commercialization is often the best choice.

Although some revenue-generating open source projects use permissive licenses, GPL and copyleft licenses seem to occupy the majority in value. This isn't surprising. Intuitively, restrictive licenses should allow you to capture more direct value from your creations.

At the same time, of course, developers may worry that copyleft licenses will deter potential users from adopting your software. And if no one uses your software, then you've failed before you've started.
Read More: Best Licenses for Commercialization

No one can accuse the open source community of lacking a sense of humor. Although software is generally serious business, developers can choose from several out-of-the-box, unexpected, and downright funny licenses.
‍
For example, the Beerware License allows users to do anything with your project material as long as the original copyright is retained. If the users like and happen to meet the author, they are obligated to buy the author a beer. (In some versions, users are encouraged to drink a beer in honor of the author.)
‍
Then there’s the WTFPL license. As the name suggests, this is a (very) permissive license which allows users to do whatever they want with your software.
‍
On the other end of the spectrum is the Passive Aggressive License. This license is brilliantly named: It essentially states that users are allowed to copy, modify, and distribute the source code — but can’t actually run, execute, or use the software built from the source code. Hence, passive aggressive.
Read More: Most Out-There Open Source Licenses

How to Choose the Right Open Source License

Deciding which open source license to use with your project can be challenging. After all, there are dozens upon dozens of license types, sometimes with only slight differences. Although each developer will have their own priorities, it can be helpful to consider several questions to start your selection journey.
Read More: How to Choose an Open Source License

How to Apply an Open Source License

Once you’ve selected an open source license, you’ll need to apply it to your project. In the most common scenario, you will want to place a file named LICENSE at the root of your project sources.
‍
Many modern SaaS tools such as GitHub and GitLab will allow you to choose a license when the repository is first created. This is, perhaps, the single simplest way you can ensure your projects contain the right legal protections from the start.

Once you start the “Create new repository” workflow, GitHub will present you with the following screen and a relevant checkbox toward the bottom. Checking the box opens up the drop-down with numerous licensing options. For existing projects without a license, just drop the LICENSE text file at the top of the repo, commit, push, and cut a new release. 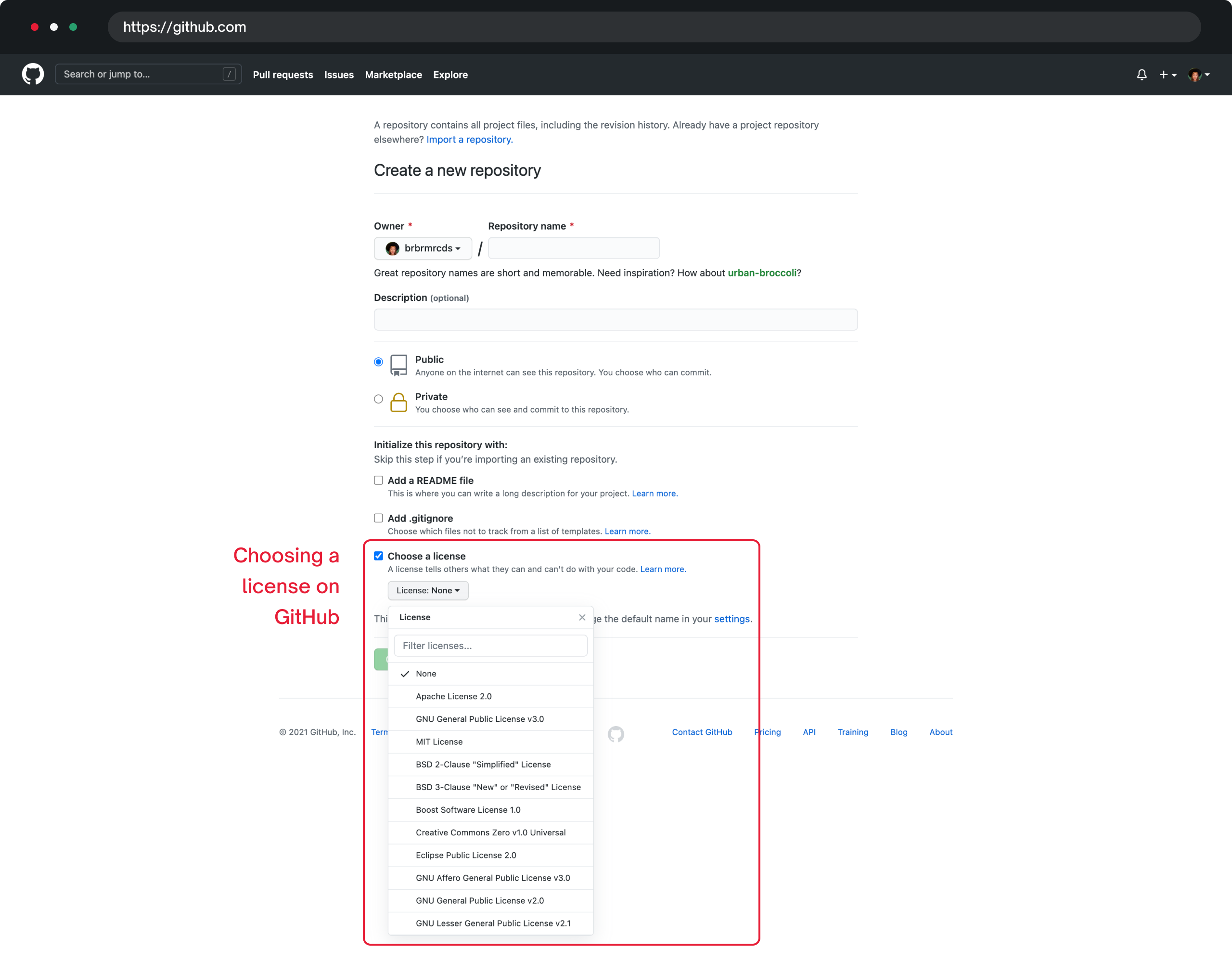 Read More: How to Apply an Open Source License

Be Continuous.
Automate the Risk out of your Open Source.